While BikeCAD Pro already includes a comprehensive collection of dimensions available in the Dimensions dialog box, it is still possible to create your own custom dimension as described in the following video. 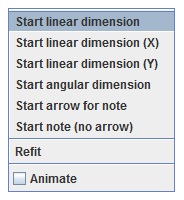 To create a User dimension right click a point on the screen where you would like the dimension to start. Right clicking will do two things: first, it will mark the starting point of your dimension; secondly it will launch the popup menu shown on the right.

This will create a dimension on the screen with an undefined end point as shown above.

The next time you right click, you will have the option to either Save dimension or Clear dimension.

Saving the dimension will cause the User dimension tab to display in the Dimensions dialog box. It is recommended that you give this new dimension a meaningful name in the text box provided. 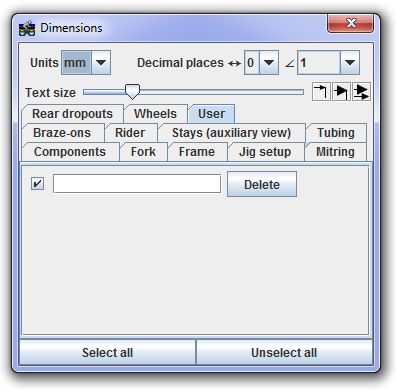 Note that once a user dimension has been created, it is not parametrically connected to the model, so as the bicycle design is changed and made longer or shorter, the dimension does not necessarily follow the geometry the way normal dimensions do in BikeCAD. If you have created a user dimension in BikeCAD Pro and would like to see that dimension added to the list of regular available dimensions, simply e-mail me a copy of the BCAD file containing this dimension and I will consider adding it to the next update of BikeCAD Pro.

END_OF_DOCUMENT_TOKEN_TO_BE_REPLACED

The current version of BikeCAD is 19.0. BikeCAD Pro customers can download the latest version as described here.